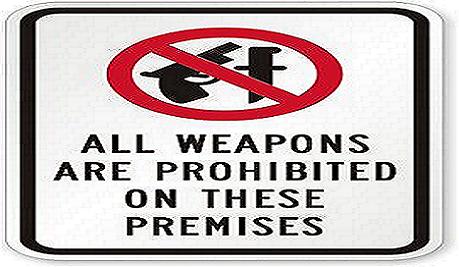 A zero tolerance approach has been adopted by the Ministry of Education as it regards weapons and illicit substances on the school’s premises.

The Laws of Guyana stipulate that a child under the age of 10 cannot be held criminally responsible for an illegal act; however, he/she can be subjected to different orders intended as intervention measures. As such, the age of a child should not rule out reporting incidents of concern to the Schools Welfare Officers within Departments of Education and the police. The School Welfare Officers in turn can seek support from the Child Care and Protection Services. The Ministry of Education urges Heads of schools to make the most of the resources of the police in controlling weapons and illicit substances in schools across Guyana.

The Headteacher is directed to take a zero tolerance approach to the possession of contraband items by students. Possession of these items must be reported to the Schools Welfare Unit, the police and the parents of defaulting students must be notified.

The Headteacher is directed to notify all parents in writing of the school’s zero tolerance stance relating to the possession of contraband items and persuade them to pay closer attention to the activities of their children.

The Ministry of Education has set unambiguous rules and sanctions governing the items which are prohibited from the school plant. (See Manual of Guidelines for the Maintenance of Order and Discipline in Schools 2002).

Operational definition of the term contraband

Contraband refers to all items forbidden by the school rules. For example, harmful drugs, alcohol, weapons, tobacco products, equipment used for smoking and pornographic material in whatever form (books and cell phones).

Weapon refers to any item that can cause injury to a person. For example, guns, knives, razors, sharpened umbrella bones, ice picks, chains, broken glass and pieces from discarded furniture such as legs of benches, desks and chairs.

The Ministry of Education in partnership with the Ministry of Health and PAHO/WHO has declared schools as NO SMOKING ZONES for all persons within the domain of the school, including members of staff and the visiting public.

Headteachers are directed to notify teachers, parents, students and canteen operators of this course of action and set clear rules and sanctions for breaches.

Headteachers are also directed to stringently forbid the sale of alcohol and drug related items at any school-related activity, be it on or away from the schools premises (See Circular No. 5/2009).

The school should be cognizant that students now ‘sniff’ glue, markers etc and overdose on prescriptive medications and cough syrups. As such, staff members should monitor students closely. Hence, continuous Staff Development training is key in order for teachers to be vigilant in the recognition of signs that students are using drugs.

Headteachers should set clear rules and sanctions for the possession, sale, trafficking, distribution, circulation, publication or broadcasting of inappropriate content in electronic or physical form on the schools premises.

In the event of an adult transmitting the content to minors, or seems to suggest trafficking, or an attempt at moral endangerment and perversion, the Headteacher must report the matter to the police.

If the Headteacher or staff is aware of unsuitable content involving a child, they should report the matter to the Schools Welfare Unit and/or police. Under the Protection of Children Act 2009, person(s) exposing children to obscene materials commit(s) an offence.

The Headteacher is directed to set clear rules and sanctions, subject to the approval of the
Ministry of Education, for all persons, staff members and students, using school-owned ICT, for example, computers, digital imaging, recording devices and school internet service. Head teachers should put systems in place to ensure that the necessary filters and restrictions are in place on all school computers where possible.

Students today are using cell phone technology to engage in pornographic activities. They are recording pornographic movies, taking indecent photos and transmitting same via Bluetooth from phone to phone. The use of cellular phones during class sessions and student assembly is prohibited by the Ministry of Education, (See Circular No. 7/2007). The “NO CELL USAGE” sign should be conspicuously displayed in strategic areas of the school plant. Sanctions for defaulters are outlined in the above mentioned circular.

Electronic devices including cameras, MP3 players, Game Boys etc. are now widespread in schools and, as such, Headteachers are directed to set clear rules and guidelines for their use/ non-use.