Senior Minister within the Office of President with responsibility for Finance, Dr Ashni Singh, MP, says the ‘Because We Care’ cash grant programme is part of Government’s commitment to enhance Guyana’s education sector.

He was at the time addressing parents, teachers and students at Queen’s College on Tuesday.

Dr. Singh was part of a larger Ministerial team which fanned out in Regions One and Four to distribute the grants today.

“Our Government, your Government’s firm commitment to ensuring that we create the conditions that are necessary for today’s generation of young Guyanese to acquire the education they need to acquire, today, in order to play the most important, fulling possible roles that they can play in the Guyana of tomorrow.” 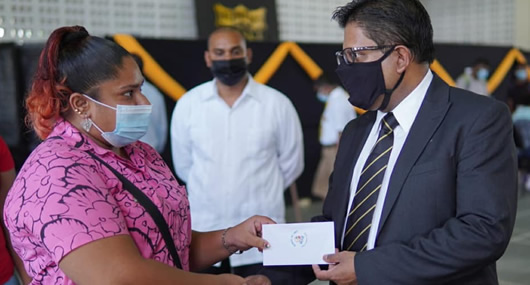 Minister Singh told parents that the grant is not only an investment into the country’s education sector, but also an injection of disposable income into the economy.

Speaking to the Department of Public Information, several parents lauded the Government for the initiative.

“This is a blessing, firstly. I know it would go a long way not only for myself, but many other parents I am thinking more of those who are very needy. This is a great initiative and I pray that they continue it in years to come.” 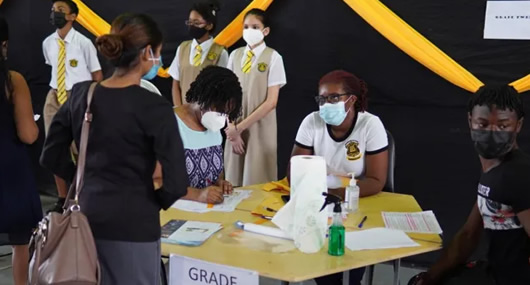 Ms. Mireialle Saint-Lot also lauded the initiative. “[It] is a very great initiative and I believe it will help a great deal, especially with those parents who are unable to help their children.”

Ms. Bibi Fatima Insanally, another parent, also expressed her gratitude to the Government for the grant.

The grant was first introduced in 2014, valued at $10,000. However, it was discontinued by the APNU/AFC administration. 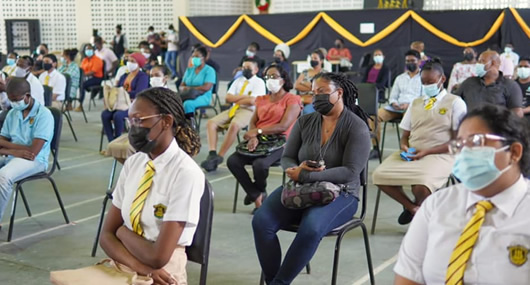 Since the PPP/C Government returned to office in August 2020, it has increased the school uniform and supplies voucher from $2,000 to $4,000 per child, which is being distributed in cash this year. Each child registered in the public school system will receive $19,000. Approximately 172,000 students will benefit from the $3.2 billion programme countrywide.

Because We Care Hon Dr Ashni Singh, Senior Minister in the Office of the President with responsibility for Finance