Minister within the Office of the Prime Minister with responsibility for Public Affairs, Kwame McCoy MP, has spearheaded the distribution of $18 million at the Stella Maris Primary and Nursery Schools.

During Tuesday’s exercise, Minister McCoy told the parents and guardians that the initiative is the Government making good on one of its manifesto promises.

“The Government of the People’s Progressive Party/ Civic – we are totally keen about the investment in our children because we consider them and take it very seriously that they are indeed our future.” 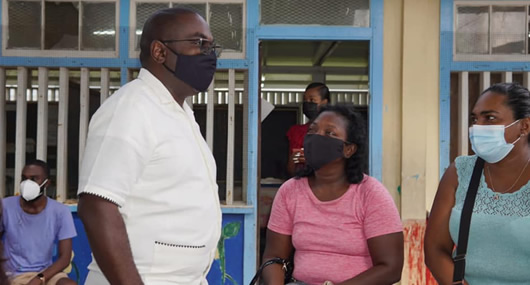 As another example of the Government’s commitment to improving the quality of education, the Minister indicated that the administration will be re-introducing the One Laptop Per Family initiative. The programme, which was launched under the previous PPP/C Administration, aims at ensuring that Guyanese – especially those in the rural areas – become technologically advanced.

The reinstatement of the OLPF initiative would go arm-in-arm with the Government’s plans to improve and modernise internet access in the hinterland regions.

“We want to make all of the necessary investments in our children’s education, and that is why we are pressing ahead with every possible option and every possible measure that we can introduce and implement in our schools for the benefit of our children,” Minister McCoy assured those present.

During Tuesday’s programme, the Public Affairs Minister also encouraged parents, guardians, and teachers to get vaccinated against the deadly COVID-19 disease. He emphasised that herd immunity is critical to ensure that people’s lives and the economy return to pre-Covid conditions.

Meanwhile, beneficiaries of the cash grant spoke highly of the initiative. 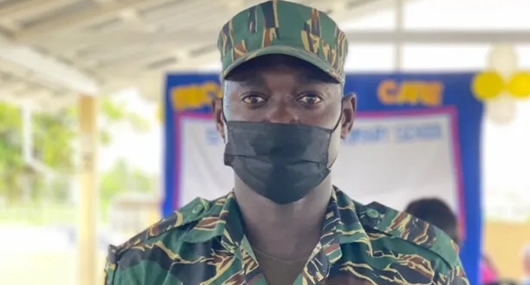 Mr. Clive Jacobs, a father of 12 and member of the Disciplined Services, said the cash grant is an excellent help amid the pandemic.

Another parent, Ms. Oletta Dover, noted that the ‘Because We Care’ programme came at the right time.

“I feel good because it is a timely gesture because school is going to be reopened, and for me, my son is going to be in Grade Six, so I am happy for the money because I am going to put it towards getting some of his Grade Six textbooks and whatever else,” the mother said. The distribution exercise continues this week as the Government looks to transfer over $3.2 billion to some 172,000 public school students. The PPP/C Administration has also indicated that it is considering extending the assistance to private school students.

Because We Care Hon Minister of Public Affairs within the Office of the Prime Minister,Kwame McCoy