Hundreds of parents in Region One are now benefitting from the Government ‘Because We Care’ cash grant initiative which has been officially launched in the Region.

Speaking with DPI, 56-year-old Herbie Campbell, a father of 14 thanked the Government for recognising the need to support parents amid the Covid pandemic. 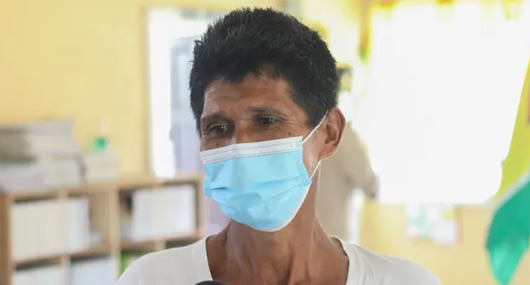 He said while he will be collecting the grants, the decision on how the money will be spent is entirely up to his children as it is for their benefit and not his. However, this activity he said will only benefit seven of his fourteen children.

“This is my desire to let them have the things that they truly deserve in the sense of lifting the standard of education and so I want to say thanks to the president and the Cabinet, you know, this is like a dream come true. It is testimony to good governance and I hope that this can continue,” Campbell said.

Stephen Henry expressed similar sentiments about the programme. “I think that this is a great initiative and it is showing their support to the entire nation and we continue to look forward to more of their support and we have been thankful for what they have been doing so far.”

Paul John, a vegetable vendor and a father of seven told DPI he has been financially affected by the pandemic and was worried about his next step to ensure his children could attend school in September.

“This (initiative) is just wonderful and so I intend to use this money on the children, purely their benefit and whatever is left, I will try to do something to keep the money rolling so whenever they need, they can get,” he said.

Minister Dharamlall, in brief remarks, said that today’s event is a fulfilment of the government’s manifesto promise and he hoped the monies would be used wisely. He visited Sebai and Canal Primary schools.

The Minister also encouraged teachers to get vaccinated so they could engage their students in September. He noted that the region has 635 teachers, yet only 209 had been vaccinated as of July 28.

“Please do not take this matter (Covid) lightly and so I urged government officials to use their influence to encourage persons especially teachers to get vaccinated. We need to protect ourselves against Covid.”

Some 172,000 students in the public education system, from nursery to secondary, will receive $19,000 with the total amounting to over $3.2 billion.