Many parents and guardians turned out for Government’s promised financial support, the ‘Because We Care’ cash grant, at a distribution exercise at the Friendship Secondary School, East Bank Demerara on Saturday. 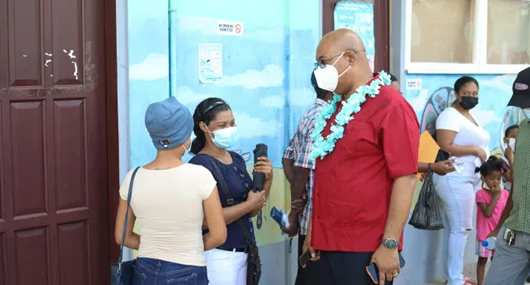 Several single parents were among the beneficiaries of the approximately $4.5 million grant, which was distributed from this location.

Ms. Marilyn Manning, who was first to receive the grant for her child, told DPI that she would be purchasing a Tablet and other school supplies for her daughter.

Another mother, Ms. Shanice Allen, whose daughter attends the Little Friends Nursery School at Friendship, said the money couldn’t have come at a better time.

“The money is very important and because of the pandemic, we need it for a lot of things. I would use it to buy supplies like books, crayon, eraser.
“I would try to get it wholesale so that it could last me a long time because I’m not certain what is going to happen. And I would also like to have sanitisers, soap and those kinds of things that she would need,” Ms. Allen said.

Mr. Isaiah Martin, who also queued up to collect his daughter’s grant, said he plans to purchase a much-needed Tablet and other school supplies.

“I would like to advise other parents to use the money wisely, and use it on the kids,” he said.

Meanwhile, Graduate Senior Assistant Mistress of Little Friends Nursery, Ms. Shonette Williams praised the Government for the initiative, even as she urged parents to use the money wisely.

“The cash grant is good, but it would be better if parents use it wisely, when I say wisely, as to benefit the children. It is a very good initiative by the Government,” Ms. Williams noted.

Minister of Public Works, Bishop Juan Edghill, MP, at the launch of the distribution exercise, said not only has the Government kept a promise it made since 2014, but it was also providing crucial support to parents. 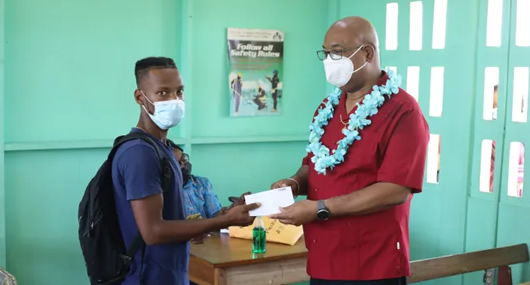 Minister Edghill said the timing of the distribution exercise was strategic, just in time for the reopening of schools in September.

The ‘Because We Care’ cash grant initiative was officially launched in Region Four on Friday. the exercise was previously held in Regions Two, Five, six, Nine and Ten.

The Government has budgeted a total of $3.2 billion for the initiative.