The Government’s ‘Because We Care’ cash grant programme has officially kicked off in Region Three with close to $400 million to be distributed over two days.

In brief remarks, the education minister noted that the cash grant initiative was not a stunt by the Government.

“We are saying that every single child and you are going to be the living and walking proof that is what we did. Not we did not do anything discriminatory and so the people who are trying to introduce that bit of ugliness into the programme, let’s rebuke them because it is not true and you are going to be walking around this community and country as living proof that it is not true.”

Minister Manickchand said she is prepared to defend the grant and what it means to parents and guardians who need financial support to take care of their children during the pandemic and plan for the future.

“We plan to make your lives easier so you will see a Guyana that you will not recognise but we want to make sure that our people rise. We want to see your children do better than you have ever done, be more than you could ever have been and we will put that in place because I know that parents are living their lives wishing better for their children,” the education minister said.

He told the gathering that the ‘Because We Care’ initiative is exactly how a government should function in the interest of its people.

“We believe that the education and health of our people, and particularly our children must be at the centre of our development programme.

“So, this year, over $60 billion has been invested in the education sector and that shows this is a government with a clear vision. And let me say that we don’t believe that whenever we give people money, it is a waste of money. We believe that every time we do cash transfers, whether it’s for education purposes for maternity purposes or because we need to respond to COVID… this money is worth it,” the Advisor said.

Dr. Ramsammy noted that the cash grants along with the online scholarships are more evidence of the Government’s commitment to education.

Speaking with DPI, Claudine Dawson, a mother of one, said the cash grant will allow her to purchase an electronic tablet for her son. “I feel so nice because he is now able to do his schoolwork on the internet and I feel grateful that the government is looking out for the poor people,” she said.

Tikram Ramsook, a father of one, said the cash was a support for which is grateful as the pandemic had affected his work. 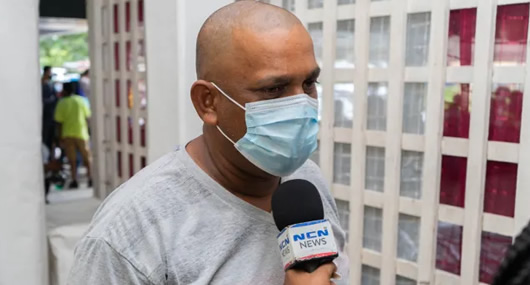 “Covid is a serious thing and work was very tough. We tried and struggle going through this as I am a carpenter so I have in and out work. I have been trying my best, so this is very good for one child to go to school because it will help a lot, or more rather, it can assist me in a very good way for my child,” he said.

Onicka Romney agreed with his sentiments.

“I would say that I am very much appreciative because this is a very good initiative, you know. Knowing that there is a struggle and the times we are facing because of COVID-19 so I am very thankful to the Government.”

Natasha Pooranmal, a mother of four, told DPI that the grant would allow her to provide the necessities for her children’s studies.

“I feel great about it and I have to thank the government for it because I am going to use the money to put on the internet because I don’t have that and my children are behind. Aside for the remaining money, I will buy a tablet so that they can do their schoolwork and the rest will be spent buying other school things.”

The distribution continues in Region Three on Monday.

Because We Care Hon Minister of Education Priya Manickchand Advisor to the Minister of Health, Dr. Leslie Ramsammy