(September 10, 2022) – A promise was made to the residents of the Martyr’s Ville Community on the East Coast of Demerara that a nursery school will be built in the community to relieve parents of the burden of taking their children to the Mon Repos Nursery School and the Good Hope Nursery School which are located further away.

The completion of the school will also serve to eliminate the overcrowding at the other two schools. The school was opened on September 5, 2022, the first day of the school term and was officially commissioned today by the Honourable Minister of Education, Priya Manickchand in the company of the Attorney General and Minister of Legal Affairs, Anil Nandlall, SC, Regional Chairman, Mr. Daniel Seeram and other senior officers within the Ministry of Education and the Regional Administration. 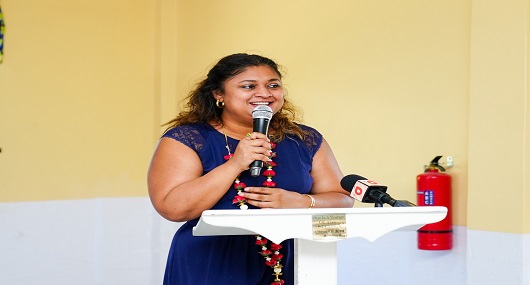 Minister Manickchand said today that Guyanese should always expect her Government to deliver on its promises and that the construction of the school is another example of fulfilling a promise that was made to the people of Guyana and specifically the residents of Martyrs’ Ville.

She said that the Government of Guyana believes in investing heavily in the education sector and that this includes constructing facilities where there are needed to ensure access to quality education. 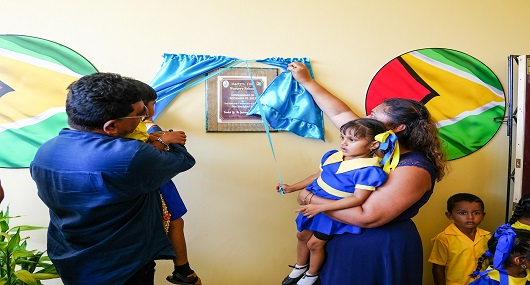 The Honourable Minister of Education, Priya Manickchand and the Attorney General and Minister of Legal Affairs, Anil Nandlall along with two pupils unveil the plaque commemorating the commissioning of the school

Minister Manickchand reminded the teachers that were present today that Region Four produced one of the students who tied for the top spot at this year’s National Grade Six Assessment, Neuel Bancroft from the Annandale Primary School. She said that in addition to parental support and natural brilliance, the student had to be surrounded by great teachers from nursery school up to Grade Six. She congratulated all teachers and urged those present today to take stock of what their responsibilities are and to ensure that they properly educate their pupils since a solid nursery foundation is important.

The Education Minister also appealed to the parents present today and explained to them that one common thread running through the stories of successful students is the support they receive from parents. “We are asking for your partnership. This means having a deep interest in your children’s education. When we get partnerships right we will see children excelling in ways we didn’t imagine,” Minister Manickchand remarked. 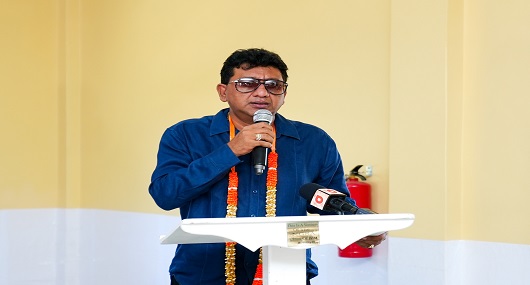 Attorney General and Minister of Legal Affairs, Anil Nandlall also thanked teachers for their hard work and saluted on behalf of the Government for a job well done.

On the topic of the new school, he said that less than three decades ago the land on which the edifice stands was a cow pasture. He enlightened those present today that he had attended nursery school in the community which was a ‘bottom house’.

He said that it is important that transformation that has taken place and continues to occur must be appreciated. He said that there are many more projects slated for the region including a modern hospital at Enmore, new water treatment plants at Friendship/Buxton, Bachelor’s Adventure and Mahaica and an industrial complex where the Enmore Estate factory was which will create jobs.

He said that these projects and more are being done to create a better country and future for the young children coming up.

Regional Chairman, Daniel Seeram described the school as a blessing to the community and the region since it will offset the overcrowding at the Mon Repos Nursery and the Good Hope Nursery School.

Assistant Chief Education Officer (Nursery), Mr. Devendre Persaud said that it is the commitment of the Government and the Ministry of Education to provide education for all Guyanese whether they live in the city or rural communities and that Martyrs’ Ville Nursery is a testimony of such commitment.

Regional Education Officer, Ms. Stembiso Grant said that the school adds to the list of 58 nursery schools in the region. She said the school is currently staffed with 98% trained teachers. She thanked the Ministry of Education for conceptualizing the project and bring to fruition to improve access and delivery of education at the nursery level.