Eleven Secondary school-aged students from each district who were successful in the Friendship Youth Leadership Competition, on Friday, received $200,000 (US $1000) and other awards from the Ministry of Education and the embassy of the People’s Republic of China.

The awards were distributed to the students at an inaugural award ceremony held at National Centre for Educational Resource Development (NCERD).

Minister of Education, Priya Manickchand, M.P, in her address, said the programme seeks to determine how government and its partners could inspire youths to become leaders in their communities. 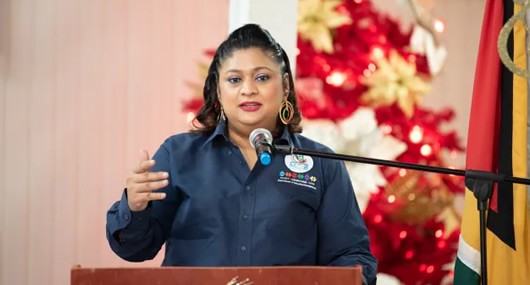 “Not only to do well academically, because that is what is expected of you in the school system, but to explore your talents and it doesn’t have to be a drawing, but in any art form to explore your ability to express yourself in writing, to explore your ability to lead and that’s what we wanted to start to encourage this countrywide search for leadership, and today, you see 11 persons from every education district coming forward with at least one person who participated and won,” she said.

The minister said the government’s mandate is to offer equitable opportunities in all of its programmes to its citizens.

China’s Ambassador to Guyana, H.E Guo Haiyan, said she is looking forward to the next competition as it will allow the youth to share their views on the relationship between Guyana and China.

She urged awardees to take full advantage of the other opportunities offered by the Chinese Government in the areas of education.

Some awardees shared their experience with DPI.

Allester Henry, a student from the Barima-Waini, stated that the funds will help him further develop a community project on which he has been working.

“It will benefit my community in a positive way, because I will have enough allowances and help better the project that I did… My project was to locate and set up a proper dumpsite because my community doesn’t have one at the moment and so in addition, I will ask for help from the government to aid me in doing a better system,” he said.

Meanwhile, Ms. Nanda Persaud expressed gratitude for the opportunity she was granted. 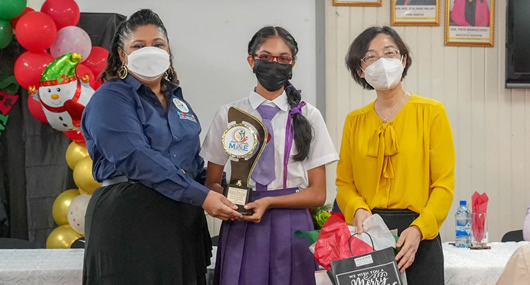 “Words cannot express how happy I am, because this has been a big opportunity for me and it has been an experience, and I’m very happy that they will continue to have this programme because I think there are many talents out there, it’s just the exposure they need,” she said.

Xaria Holder, another recipient of the award was pleased to have emerged a winner despite the challenges faced throughout the competition. 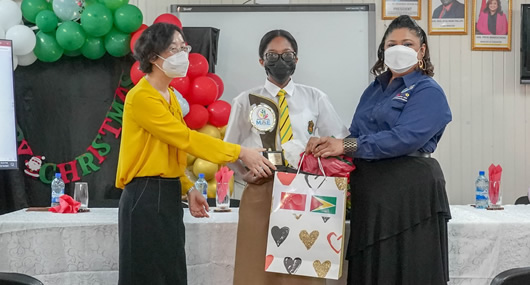 “It has helped me with my social skills and it was a very long process and during that time I wasn’t always in Guyana so I also had to compete virtually, so it was a challenge yes but I’m happy with the outcome…Well, I’m definitely starting or continuing this so every year or at the beginning of every school term I’ll be sharing out hampers and hopefully be able to meet more needs,” she said.

The leadership programme took the form of a competition. Participants were required to focus on three critical areas; a community-based project, critique of a work of art and participation in sporting activities.